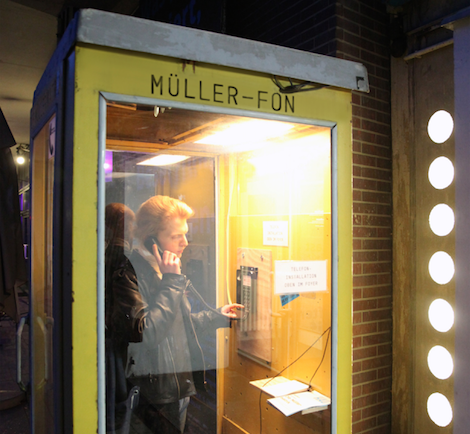 “On the other hand, it is not proven by anything that man is the ruling creature on earth. Perhaps it is the viruses, and we are only material, a kind of pub for the viruses. Man as a pub – that, too, is only a question of optics.”

In MÜLLER-PHONE, Heiner Müller is brought to life and is available to the public by telephone around the clock. Half human, half telephone computer, Müller comments on a wide variety of contemporary topics: from social inequality to the crisis in Europe to the current theater landscape. Callers can individually shape their exchange with Heiner Müller by selecting a key. Müller’s political far-sightedness and his unbroken actuality form the basis of the conversation.

With the analysis, sound montage and digitalization of the extensive Müller audio material, Interrobang have created an artificial Heiner Müller intelligence that looks back on Heiner Müller’s texts and interviews in a ghostly and disconcerting way and reconfigures them for the present and the future.

“This form of communication is disconcerting and fascinating. […] an artificial Heiner Müller intelligence, immortal and caught in the system, seems to talk to you.”
(taz, Julika Bickel)

“An assembly of original sound material from Müller’s extensive archive as intricate as it is accomplished.”
(Der Tagesspiegel, Christine Wahl)

“Heiner Müller was distinguished by quiet humour and a predilection for the classical quip. He certainly would have enjoyed the installation ‘Die Müllermatrix’ by Interrobang in which the audience chats to a Müller cyborg by telephone.”
(Berliner Morgenpost)

“The installations is reminiscent of a hearing or a prison visit, the only thing missing is the person sitting opposite.”
(Wired, Cindy Michel)

Müller-Phone is a further development of the installation Die Müllermatrix, which was part of the festival “Heiner Müller!” 2016 at HAU.