A Labyrinth of Guilt Based on Kafka 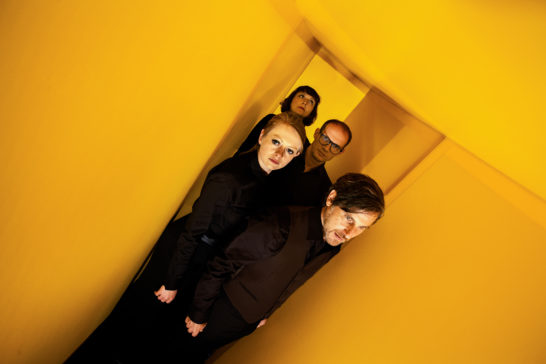 “Someone must have traduced Joseph K., for without having done anything wrong he was arrested one fine morning.“ One may feel quite akin to Kafka’s protagonist in his famous novel “The Trial”, living in a world which is obsessed with high performance and self-control and in which we tend to turn ourselves into our very own relentless judges: Am I successful enough? Have I put my talents to use sufficiently? Do I manage to balance work, family and friends? Am I happy with my life and if not: is it not my own fault? Unlike Kafka’s novel we don’t even need an outer control anymore: We happily accuse and arrest ourselves without having done anything “wrong“ in a juridical sense. We blaim ourselves rather than society. We go and see a therapist, personal coach or yoga instructor instead of joining a union or a demonstration.

In looking back at Kafka’s classic novel, which reveals striking motives quite relevant for 21st century’s globalist society, Interrobang drags the inner tribunal of us self-responsible neoliberal human beings out in the open for public trial.

“Participation is taken to another new high point in Prozess 2.0 because when you take part, you take part in your own sentencing. In the digital self-control state, this would perhaps be Participation 3.0.”
(Tom Mustroph, Tip Berlin, 26/01/2017)

“After this evening, as the final words say, you would never stop collecting evidence against yourself, carrying the internal court around with you, being subject to it – just as K. in Kafka’s ‘Trial’ was – which was Interrobang’s inspiration for this ‘guilt labyrinth’. Worth a visit.”
(Ulrich Seidler, Berliner Zeitung, 28/01/17)

“…the group, working in different combinations of people, is specialised in conflicts. On the one hand this is uncomfortable for the spectator but when it’s up and running on the other hand, it can make you stop for a moment or laugh about yourself. Interesting in every case. The production ‘Der Prozess 2.0’ makes it all possible. The person in the performance and surveillance oriented society of the 21st century mutates into the harshest judge of themselves. With increasing pressure and growing levels of surveillance from outside, the internal judgement becomes harder. Are expectations fulfilled? After the interval you can finally relax a bit – but how deceptive. The opened curtain reveals the ‘internal court’ in which the bureaucrats are now employed as prosecutors, judges and defence lawyers. The spectator now plays the role of the jury, deciding what is taken to court. You can put your hand up, cast the first stone, tentatively finding out whether your own files are waiting to be tried. Oh yes, everything’s there. Fate, I await you. It’s very well done.”
(Lucia Tirado, Neues Deutschland, 31/01/17)

“If you let yourself in for the experiment, you question yourself, enmesh yourself in unexpected debates – and fill your record file. But this has its consequences. The path leads you straight to the courtroom where the performers Till Mülller-Klug, Lajos Talamonti and Elisabeth Lindig embody the internal court. Charges are made for ‘neglected self improvement’, ‘negligent workaholism’ or similar crimes you can read as an analysis of the zeitgeist. Everyone decides for themselves what they accept as their sentence at the end of the cleverly constructed and witty evening of performance.”
(Dimo Riess, Leipziger Volkszeitung, 19/09/16)

“I was lead very cleverly through the installation which incorporated the motifs in the novel and demonstrates their relevance today. A stimulating evening, extremely cleverly constructed.”
(schräglesen.de)